One of Hunter Biden’s former business partners referred to Joe Biden as “the Big Guy” in a panicked message the same day The Post broke news of the infamous laptop from hell left behind by the president’s son, The Post has learned.

James Gilliar, a former British special forces officer with ties to UK intelligence services, discussed The Post’s exclusive report with an unnamed person on Oct. 14, 2020, according to the message provided by a whistleblower to GOP congressional investigators probing the laptop.

In the message, Gilliar, 58, reassured the person that the revelations about Biden’s apparent involvement in his son’s foreign deals would not be damaging — regardless of the outcome of the 2020 presidential election.

Gilliar was asked if “Hunter and/or Joe or Joe’s campaign [would] try to make it ‘Oh, we were never involved’ … and try to basically make us collateral damage?”

“I don’t see how that would work for them…,” Gilliar responded in the 6:07 p.m. message reviewed by The Post.

“I think in the scenario that he wins they would just leave sleeping dogs lie,” Gilliar added.

“If they lose, honestly, I don’t think that the Big Guy really cares about that because he’ll be too busy focusing on all the other s–t he is doing.”

The identity of the “big guy” has since formed part of the grand jury investigation in Wilmington, Del., into Hunter’s business dealings — as calls ramped up to have President Biden, who has repeatedly denied any involvement in his son’s dealings, included in a conspiracy probe.

Gilliar had referenced the “big guy” as he acted as the driving force behind Hunter and his uncle Jim Biden’s planned multimillion-dollar deal with Chinese energy conglomerate CEFC.

In an email to Hunter, Jim and other partners on May 13, 2017, Gilliar outlined an equity breakdown in which 10% of the lucrative CEFC joint venture would be held by Hunter “for the big guy.”

That email, which was previously revealed by The Post, was found on the laptop Hunter abandoned at a Delaware repair shop in April 2019.

Another former associate of the first son, US Navy veteran Tony Bobulinski, publicly declared in October 2020 that “big guy” was a reference to President Biden — and alleged that Biden was aware of, and involved in, the planned CEFC deal.

Bobulinski, who gave the FBI all his messages and documents related to the Biden family that same month, told the feds he met with Joe Biden on May 2, 2017, in the lobby bar of the Beverly Hilton with Hunter and Jim.

He said the purpose of the meeting was to be vetted for a trusted role as CEO of the joint venture with CEFC.

At the end of the meeting, Bobulinski said, Biden told him: ““Thank you for helping my son … My son and my brother trust you emphatically, so I trust you.”

Bobulinski claimed he had a second meeting the following morning with Biden backstage at the Milken Institute Global Conference, where the then-former VP was speaking about cancer.

“Keep an eye on my son and brother and look out for my family,” Biden told him, according to Bobulinski.

Two weeks after the meeting, Gilliar sent Bobulinski an urgent message on the encrypted WhatsApp messaging service on May 20, 2017, warning him not to mention Biden’s involvement in the CEFC deal.

“Don’t mention Joe being involved, it’s only when u are face to face, I know u know that but they are paranoid,” Gilliar told Bobulinksi in the message.

“OK they should be paranoid about things,” Bobulinski replied. 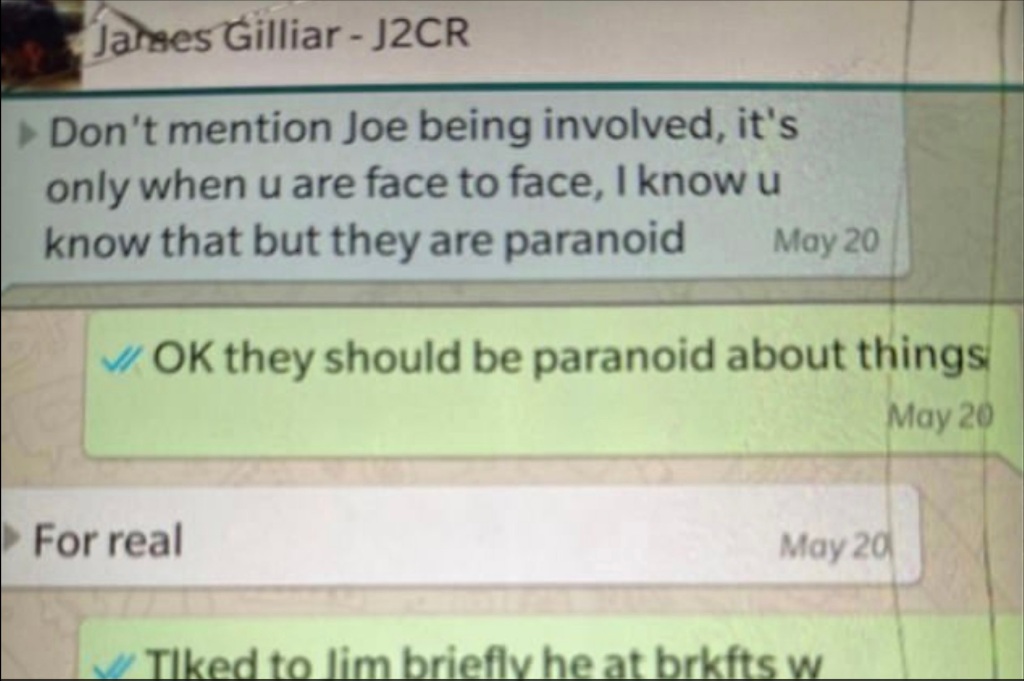 Messages between from Gilliar warning Bobulinski to not mention Joe Biden’s involvement in the CEFC deal.

The identity of the “big guy” was raised again recently when it was brought up as part of the grand jury probe into Hunter’s business dealings.

At least one witness who testified before the secret panel was asked about the identity of the moniker mentioned in Gilliar’s email.

Biden has repeatedly denied any knowledge of Hunter’s overseas business dealings, but a newly released voicemail that Biden left for his son in 2018 about his Chinese business dealings appeared to contradict his prior assertions.

In the voicemail, Biden called his son to discuss a New York Times article detailing Hunter’s dealings with a Chinese oil tycoon accused of economic crimes — telling him, “I think you’re clear.”

It comes as officials were reportedly weighing possible charges against Hunter as the probe into the president’s son reached a “critical stage,” sources said.

House Minority Leader Kevin McCarthy (R-Calif.) has already vowed a series of “aggressive” investigations — with public hearings — into Joe, Hunter and Jim Biden if the GOP takes control of the House in the November midterms, as polls suggest.

“The message to his ranking members has been clear: Be aggressive, leave no stone unturned, ignore backlash from the leftwing media and do everything in your power to be ready to hold Biden accountable on day one,” a source close to McCarthy said Wednesday.

Rep. James Comer (R-Ky.), the top Republican on the House Oversight Committee, added: “It’s clear the dam is breaking and come January, Republicans will use the gavel to get answers for the American people.

“Hunter and members of the Biden family have peddled access to the highest levels of government to enrich themselves. This is an ethics nightmare and national security threat … McCarthy and Oversight Committee Republicans are determined to hold the Biden family accountable for their shady business dealings with foreign adversaries.”