But DailyMail.com can now reveal that Hunter’s  financial relationship with Baturina was far more extensive, with her firm investing $40million in a real estate venture by Hunter’s company Rosemont Realty.

Documents outlining the plan said the money came from a mix of investors, including $40million from Inteco Management AG, a Swiss company owned by Baturina.

The Inteco group is a plastics and construction behemoth that made Baturina the richest woman in Russia at the time. She has a current net worth of $1.4billion according to Forbes. 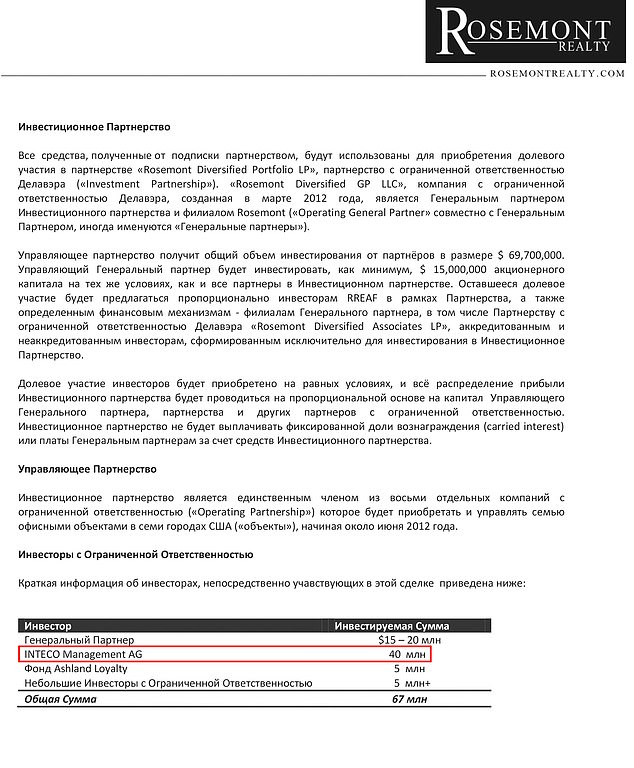 The documents reveal that Hunter’s financial ties to Baturina began years earlier than previously thought – and were much more significant as well.

Hunter’s dealings with the Russian billionaire first hit headlines in September 2020 when the Senate Homeland Security Committee published a report flagging her unexplained wire transfers to a company linked to the president’s son.

The report said Hunter founded the company a year earlier with his best friend Devon Archer, a former Abercrombie & Fitch model and advisor to John Kerry, now in prison for fraud.

The transactions were flagged in suspicious activity reports filed to the US Treasury Department.

Baturina has refused to discuss them. But her brother, Viktor Baturin, 63, has told DailyMail.com the money was ‘a payment to enter the American market.’

‘Hunter Biden had no interest in and was not a co-founder of Rosemont Seneca Thornton, so the claim that he was paid $3.5 million is false,’ he told CNN in September 2020.

In 2015 Baturina set up a US office to oversee her American investments and in 2016 she put $10 million in commercial buildings next to the Barclays Center in Brooklyn, New York.

But according to the new emails obtained by DailyMail.com, Baturina had already negotiated an investment deal with Rosemont Realty back in 2012 to plow $40million into the purchase of seven office buildings in Texas, Colorado, Alabama, New Mexico and Oklahoma. 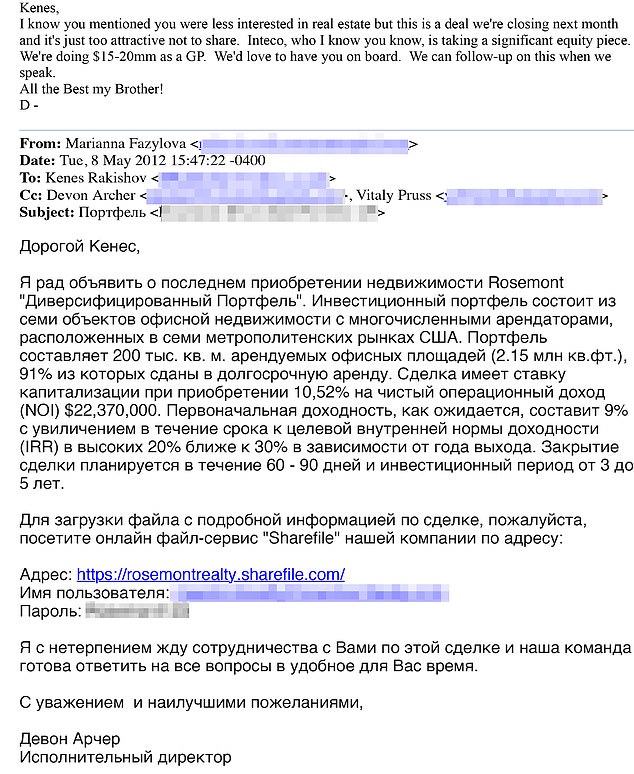 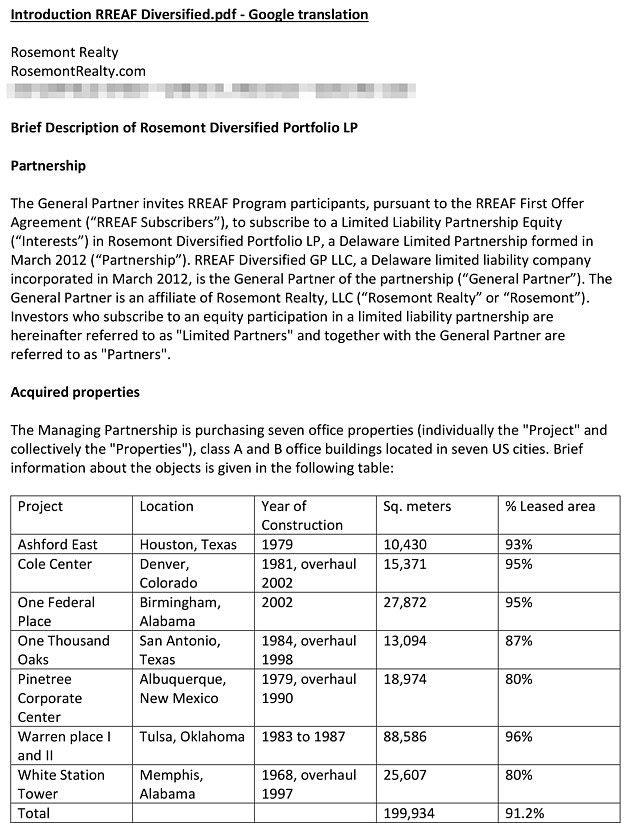 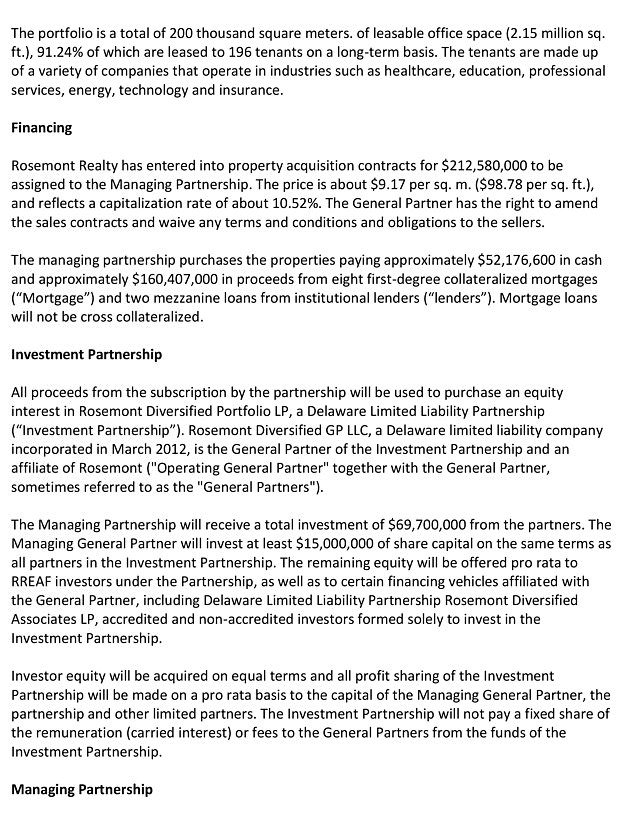 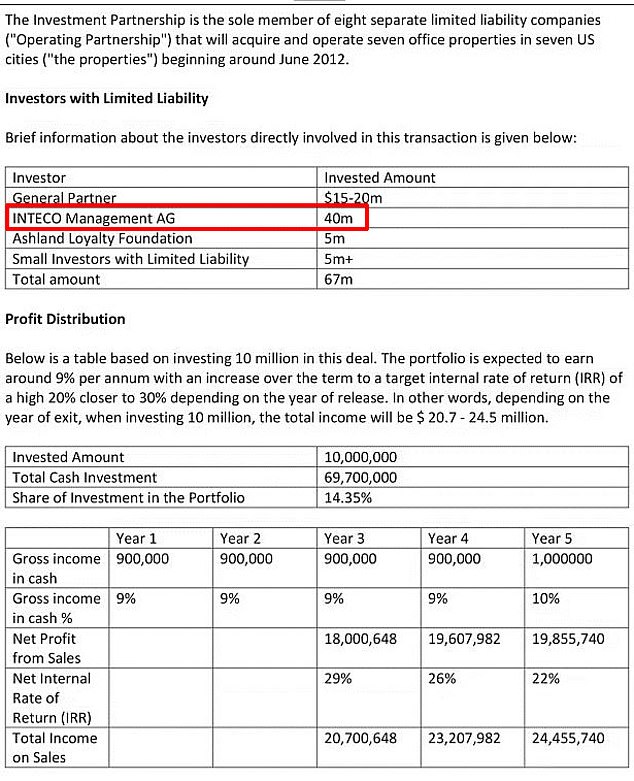 The emails come from a leak obtained by an anti-corruption group, the Kazakhstani Initiative on Asset Recovery. The emails were sent to Kenes Rakishev, a Kazakh businessman worth more than $950million, who became friends and business partners with Hunter.

Rakishev was photographed with Hunter and then-Vice President Joe Biden at an infamous meeting at Cafe Milano in Washington DC in 2015.

Baturina and her husband, who died in 2019, were also invited to the gathering of Hunter’s business associates to meet his powerful father.

Hunter’s friend and partner in Rosemont Realty, Devon Archer, was trying to get Rakishev to invest in their US office building venture alongside Baturina, and emailed him details of the deal in May 2012.

‘I know you mentioned you were less interested in real estate but this is a deal we’re closing next month and it’s just too attractive not to share,’ Archer wrote to Rakishev in one leaked email.

‘Inteco, who I know you know, is taking a significant equity piece… We’d love to have you on board.’

Archer attached a three-page document written in Russian outlining the deal. The document says the seven offices would be bought by a partnership set up in March 2012, and that ‘Rosemont Realty has entered into property acquisition contracts for $212,580,000’.

The deal comprised about $52million in cash and $160million in mortgages.

Rosemont Realty was putting up at least $15million of its own cash alongside Baturina’s and other investors, the document said.

‘The Managing Partnership will receive a total investment of $69,700,000 from the partners. The Managing General Partner will invest at least $15,000,000 of share capital on the same terms as all partners in the Investment Partnership,’ an approximate Russian translation states.

Archer was listed as executive director of Rosemont Realty on the emails and deal documents.

Representatives for Hunter and Baturina did not respond to requests for comment.